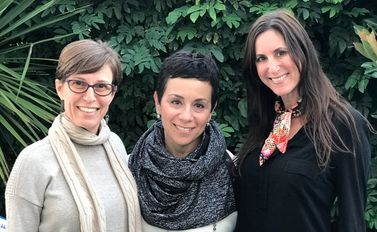 Rabbi Yael Ridberg
Email Rabbi Ridberg
Rabbi Ridberg received her BA from the University of Wisconsin-Madison in 1990 in Communication Arts and Women’s Studies.
​
In addition to her congregational responsibilities, Rabbi Ridberg serves as the Vice President for Education for Waters of Eden Mikvah and Education Center, as a Board member of Jewish Family Service, as well as an executive Committee Board Member at the San Diego Jewish Academy.

She is a Past President of the Reconstructionist Rabbinical Association and has been a member of the Rabbinic Council of the New Israel Fund, the Board of Plaza Jewish Community Chapel in NYC, and has led a bereavement support group through the Jewish Board of Family and Children’s Services and the Jewish Healing Center in NYC. In 2007, Rabbi Ridberg became certified as a yoga instructor with Yogaworks.

Rabbi Ridberg serves as an author, commentator, advisory committee member for Guide to Jewish Reconstructionist Practice series published by the Reconstructionist Rabbinical College, and is a chapter author for the 2007 URJ publication, Life, Faith and Cancer. Her articles have appeared in The Huffington Post, Times of Israel, and Kveller.

She lives in La Jolla with her husband and four daughters.

Betsy Schneider joined Dor Hadash in 2008 from South Florida where she was Creating Jewish Memories with families for ten years.  As Education Director in Reform and Reconstructionist synagogues, Betsy has dedicated her career to educating children and their families and bridging the gap between synagogue life and the home.  As a child in Buffalo, New York, Betsy remembers sharing special Jewish times with her parents and sister, which inspires her to offer opportunities for today's families to share fun and meaningful Jewish experiences together.

Betsy lives in Tierrasanta with her husband, David and their son, Eli.

Julie joined Dor Hadash in August 2017. Originally from Maryland, Julie resides with her family in Encinitas and has been in San Diego for over 20 years. After completing her Bachelor's degree at Colorado State University, Julie worked as an elementary school teacher in San Diego County. While raising her two sons, she became an administrator. Julie has an extensive office administrative background, most recently as the Administrator at Camp Mountain Chai. She enjoys the outdoors, cooking, and playing tennis when she is not working.